CGH welcomes the newest member of our medical team

Charlotte Gastroenterology & Hepatology is pleased to have Chris Maambo, PA-C join our medical staff in the Huntersville and Mooresville offices. Chris always knew he wanted to be in healthcare and his inspiration came from knowing that he could help people with treatable illnesses get better. This led him to begin his journey into the field of medicine at the University of South Carolina where he received his Bachelor of Science in Biology.

Chris attended the physician assistant program at Anne Arundel Community College in Maryland and received his Master of Medical Science from St. Francis University in Pennsylvania. He initially worked as a PA at the Franklin Square Hospital Center in Maryland. From there, he moved cross country to Washington state where he was a PA at Yakima Gastroenterology Associates. After two years, Chris and his wife, who also practices medicine as a pathologist, decided to move back to the east coast to be closer to family.

During his free time, Chris enjoys spending time with his wife and two daughters, who are 5 and 7 years old. He is also a big fan of soccer and is not only a spectator, but plays in recreational leagues as well. 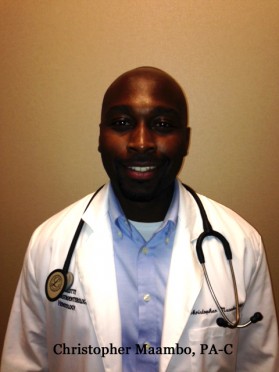 Endoscopy is a safe medical procedure that uses a thin, flexible tube, equipped with a light and camera, to view the interior of the gastrointestinal system. Endoscopy can be performed in our Randolph Road, Ballantyne, Huntersville, and Mooresville offices. Learn More

Colonoscopy is an out-patient procedure used to screen for colorectal abnormalities, including cancer and precancerous conditions. A physician inserts a colonoscope, a long, flexible, tubular instrument, which transmits an image of the lining of the colon onto a screen, enabling the doctor to view any abnormalities. Learn More

An upper endoscopy observes the inside of the upper digestive tract — the esophagus, stomach, and first part of the small intestine. Learn More

Endoscopic ultrasound is a minimally invasive procedure that combines endoscopy and ultrasound to produce highly detailed images of the lining and walls of the upper and lower gastrointestinal tract. These sound wave-produced images are used to determine the cause of symptoms of abdominal pain, or to diagnose or determine the spread of certain types of cancer. EUS is also a valuable tool in evaluating certain lung diseases or viewing organs such as the pancreas, gallbladder, and liver. Learn More

An endoscopic retrograde cholangiopancreatogram is a procedure that combines the use of a flexible, lighted scope (endoscope) with X-rays to examine the ducts of the gallbladder, pancreas, and liver. Learn More

For the convenience of our patients, we offer a four-chair infusion center at our Randolph Road office location. Learn More

A breath test is a painless and non-invasive way to diagnose a number of gastrointestinal disorders. During a breath test, patients will breathe into a machine that takes samples to test for one of the four conditions below Learn More

Capsule endoscopy allows physicians to examine the lining of the small intestine. This part of the GI tract cannot be reached by traditional upper endoscopy or by colonoscopy. Learn More